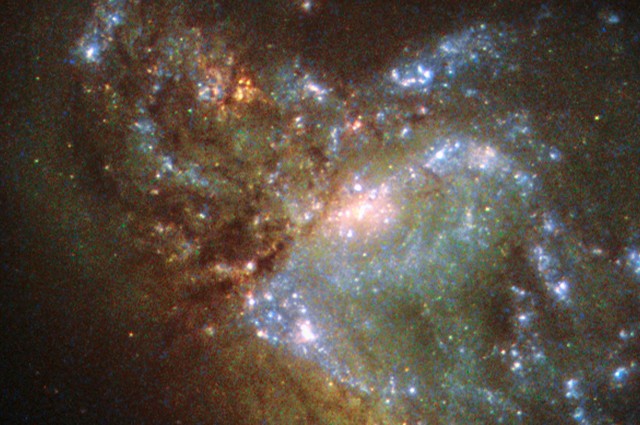 Galaxy mergers are some of the most important events in the universe, and since the Big Bang they have been shaping how galaxies form and evolve. By observing and studying mergers, astronomers can learn a lot about the processes going on inside galaxies.

The latest image from the NASA/ESA Hubble Space Telescope shows two galaxies that have almost become one. The object, called NGC 6052, was for a long time thought to be an abnormal galaxy before it was discovered that it’s actually two galaxies in the final stage of a merger. The galaxy is located 230 million light-years away in the constellation of Hercules and the photo was snapped by the Wide Field Planetary Camera 2.

Galaxy collisions are slow, and in the modern universe they’re also an uncommon event; only about 3 percent of (relatively near) galaxies are mergers. When two big galaxies are close together, they start spiraling around each other and, over time, begin to disrupt their regular structure and merge into a single object.

The process is slow enough for the original stars not to be affected too much. They might be moved to different orbits, but most of them will continue to shine unaffected. The shape of a galaxy is given by how the stars are distributed, and since things are quickly changing during mergers, they lack the regular structure of spirals and elliptical galaxies.

But a merger is not a simple reshaping of two galaxies. Galaxies, especially spirals, have a large amount of gas in them, and when they merge, the strong tidal forces kick-off an intense star-formation epoch. NGC 6052 has been forming new stars for the last 400 million years, at a rate of 42 stars with the mass of the Sun every year. Between 12 and 60 percent of the stars in the galaxy were formed during the merger.

The NGC 6052 merger will continue for many millions of years, if not billions, and the final stable shape it will possess will be significantly different from the shape of the parent galaxies that we can see merging today.