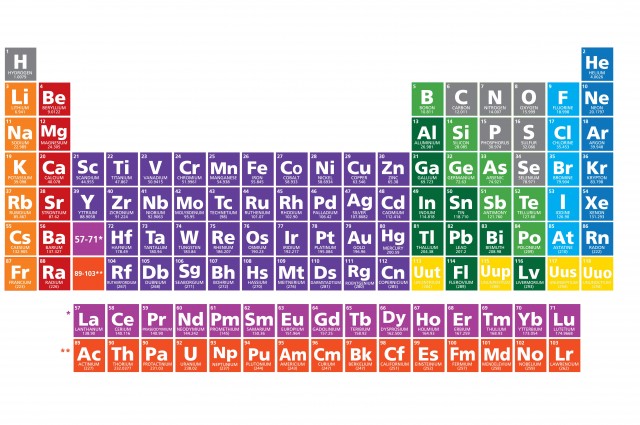 Break out the champagne; the 7th row of the periodic table has been completed with the addition of four new elements. While their existence had been predicted before, they have only now been officially discovered – meaning they can be formally named on the table.

At the moment, the four elements – which occupy the 113th, 115th, 117th and 118th positions – have the monikers Uut, Uup, Uus, and Uuo respectively. That will change now, though, thanks to scientists from Russia, the U.S., and Japan. The number denotes the atomic number, the total number of protons in one atom of the element.

Credit for element 113 has been awarded to scientists at the RIKEN Institute in Wako, Japan, while a Russian-U.S. collaboration from the Joint Institute for Nuclear Research in Dubna and Lawrence Livermore National Laboratory in California takes the plaudits for 118. Elements 115 and 117 were found by the same collaboration with the addition of the Oak Ridge National Laboratory in Oak Ridge, Tennessee.

The discoveries were ratified by the International Union of Pure and Applied Chemistry (IUPAC) on December 30, meaning the naming process can now go ahead. The discoverers get the right to choose the name, so the Japanese team will name element 113 – with previous reports suggesting they may pluck for “Japanium.”

“The chemistry community is eager to see its most cherished table finally being completed down to the seventh row,” Professor Jan Reedijk, President of the Inorganic Chemistry Division of IUPAC, said in a statement.

The elements, which do not occur naturally and can only be produced in the laboratory, were discovered by smashing together light nuclei and tracking the decay of the resulting superheavy elements. They exist only for a fraction of a second, which has made their discovery difficult. Element 113 was found by hitting a thin layer of bismuth with zinc ions traveling at a tenth the speed of light, temporarily producing an atom of Uut.

But even though the table is now effectively complete, the Japanese team led by Kosuke Morita now plans to “look to the unchartered territory of element 119 and beyond,” reportedThe Guardian.

Results detailing the discoveries have yet to be published, although details of element 113’s discovery have been reported in the Journal of Physical Society of Japan.