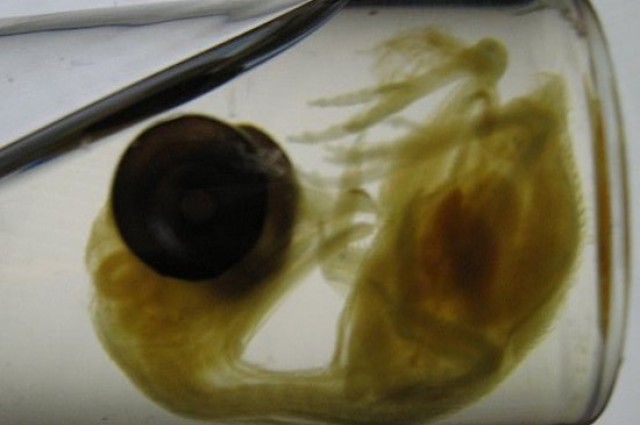 Sixty-six million years ago, the age of the dinosaurs came to a dramatic close as a huge asteroid impact accelerated them on a path towards extinction. Not all of them died out, however; those that survived went on to become today’s birds.

Scientists are still trying to carefully map out the anatomical changes that occurred between dinosaurs and birds during this time, and there’s arguably no better way to do this than to engage in a little “reverse evolution.” With this in mind, a team of researchers has grown “dinosaur legs” in chicken embryos, as revealed in their study in the journal Evolution.

Remarkably, previous research manipulating chickens into “becoming” dinosaurs has already taken place. Back in 2015, a study showcased that chickens that had been tweaked during embryonic development could grow a dinosaur-like snout. A year earlier, a more low-tech study demonstrated how a few strategically-placed weights could make a chicken walk along like a Tyrannosaurus rex.

This new research aimed to uncover the secrets behind the development of dinosaurian skeletons, once again using chickens. In fact, they’re already veterans when it comes to reverse evolving: In 2015, the researchers managed to get chickens to grow dinosaur-like feet. This time, they were interested in how the leg bones themselves grow.

Comparing the leg bones of Deinonychus and common chickens. In dinosaurs, the fibula and tibia are roughly the same length; not so in chickens and other modern birds. The lower panels show how switching off IHH switches on another gene called PthrP, which encourages fibula growth. Joâo Botelho et. al./Evolution

Modern-day birds are the living descendants of a large group of feathered, non-avian dinosaurs called the Coelurosauria, which includes Deinonychus, Tyrannosaurus, andVelociraptor. Archaeopteryx, the most famous example of the transition between the most ancient Coelurosauria and today’s birds, had a tube-shaped bone called the fibula that reached all the way down to the ankle.

Nowadays, bird’s fibulae don’t reach the ankle, and they become more splinter-like as they grow. In order to find out why this change happened, this team of researchers from the University of Chile looked into the genetics of the chicken itself. By inhibiting the activity or “expression” of a gene with the somewhat odd name of Indian Hedgehog (or IHH), they noted that the long, dinosaur-like fibulae continued to grow.

This means that the fibulae of modern chickens are prohibited from growing by their genetics beyond a certain point. The study’s authors note that this stunted growth appears to be regulated by an ankle bone called the calcaneum. As the calcaneum develops, it essentially dictates when the nearby fibula should stop growing.

When IHH was inactivated, however, another gene related to bone growth called PthrPshowed far stronger activity. This encouraged the fibulae to keep growing until they attached to the ankles – highly reminiscent of the skeletal anatomy of the Archaeopteryx.

Sadly, these dinosaur-like chickens weren’t allowed to hatch. These were not intended to become bonafide dinosaur-like creatures for commercial or non-scientific purposes, so any dreams of reverse evolving chickens to become buyable Deinonychus pets may have to be, for the time being, put on hold.