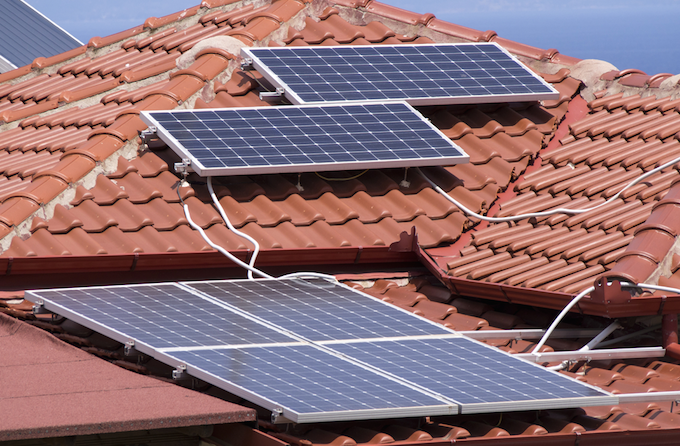 To take advantage of the sun’s energy to satisfy our ever-increasing need for electricity, Americans will have to take a fresh look at their roofs. A report by the National Renewable Energy Laboratory shows that if all suitable roof areas in the United States were plastered with solar panels, they would generate about 1,118 gigawatts of solar power. That is 40% of the power that Americans consume every year.

And that isn’t the half of it. The study only estimates the solar power potential of existing, suitable rooftops, and does not look at the immense potential of ground-mounted photovoltaics, said NREL senior energy analyst Robert Margolis in a press release. “Actual generation from PV in urban areas could exceed these estimates by installing systems on less suitable roof space, by mounting PV on canopies over open spaces such as parking lots, or by integrating PV into building facades. Further, the results are sensitive to assumptions about module performance, which are expected to continue improving over time.”

The new study doubles the estimate from a 2008 NREL study on US rooftop solar potential, which showed an estimate of 664 GW. Margolis and his colleagues attributed the higher numbers to increases in better-performing modules, improvements in estimation of building suitability, higher estimates of the total number of buildings, and better methods to calculate photovoltaic performance.

For the new report, which is the result of three years of research, the team used light detection and ranging (LIDAR) data and geographic information system (GIS) methods to map the topography of 128 cities around the country down to the square meter. This helped them determine the total amount of roof area suitable for hosting rooftop solar panels. Then they simulated the productivity of the panels on this roof area to estimate total rooftop solar potential, and finally extrapolated that data to the whole country.

The six states with the highest potential to offset electricity use all have significantly below-average household energy consumption, the analysts note, indicating that any state that wants to make the most of solar incentives should also prioritize energy efficiency.