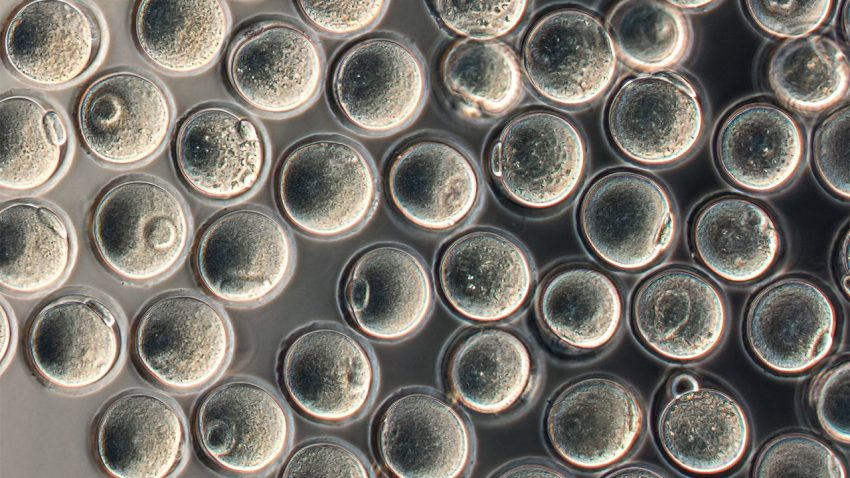 In work that raises the prospect of new infertility treatments and designer babies, researchers have used stem cells to grow fertile mouse egg cells for the first time entirely in a lab dish. The eggs gave rise to pups after being fertilized and implanted into rodent foster mothers. The method—which sometimes produced defective eggs and had a success rate of less than 1%—won’t be producing human egg cells any time soon, but the technique could help researchers identify key genes involved in egg development and maturation.

The work is a “stunning achievement,” says George Daley of Harvard Medical School in Boston, who was not involved in the project.

Egg cells are uniquely powerful, containing the instructions needed to start the development of a new organism. Deriving such cells in the lab has long been a goal for researchers who want study their development in more detail. It also raises a futuristic possibility: being able to make human eggs in the lab from skin or other donor cells—and even being able to make genetically altered egg cells. However, any application to human cells is a very long way off, says Katsuhiko Hayashi, a stem cell biologist at Kyoto University in Japan, who led the new mouse egg studies.

The new work, reported online in Nature today, builds on more than a decade of research in which Hayashi and his colleague Mitinori Saitou developed ways to derive egg and sperm cells—also called germ cells—from pluripotent stem cells. (Pluripotent stem cells resemble cells in early embryos and can in theory become any tissue in the body.) In 2012 they made fertile egg cells from both mouse embryonic stem (ES) cells, derived from early mouse embryos, and induced pluripotent stem (iPS) cells, which are reprogrammed adult cells that have taken on the characteristics of ES cells. But to accomplish the final steps of egg development, the researchers had to implant those stem cells into a living mouse. Then, this summer, the scientists showed that they could keep developing mouse ovaries growing in the lab and make them produce mature, fertile eggs.

The work published today combines the insights gained from that study with the earlier techniques for turning ES and iPS cells into egg precursor cells. First, the scientists used ES and iPS cells to make immature egg precursor cells. Then they inserted those precursors into clusters of cells taken from fetal mouse ovaries. They carefully cultured those cell clusters for more than a month.

The team’s lab-based ovaries produced more than 50 mature egg cells each, the scientists report. The labmade eggs had higher rates of chromosome abnormalities than is usually observed in eggs in normal mouse ovaries, but more than 75% had the correct number of chromosomes. The scientists mixed some of those eggs with mouse sperm, producing more than 300 two-cell embryos, which researchers then implanted into foster mothers. However, only 11 of those embryos—or 3%—grew into full-term pups, compared with 62% for eggs taken from adult mice and fertilized in vitro. The reasons for that are still unclear, Hayashi says. The pups that did survive grew into apparently healthy, fertile adults.

The researchers also showed that they could derive new ES cell lines from embryos generated from the labmade eggs. That recreates, they note, a full cycle of female germ cell development in the lab.

If scientists could use a similar technique to transform human ES or iPS cells into fertile egg cells, it could offer new options for infertile woman, such as those who have gone through egg-destroying chemotherapy. It would also open a whole new range of ethical questions. If researchers could derive egg cells from skin cells or even from a genetically modified line of ES cells, for example, then it would potentially be a way to make a designer baby, with specific genetic alterations. “If a similar strategy proves successful in human pluripotent stem cells, then the options for reproductive biology, but also genetic modification of the germ line, are profound,” Daley says.

But that is a long way off, Hayashi says. He and his colleagues are working to apply the new technique to primate cells, but he says the work is far too preliminary for any clinical applications. “We cannot exclude a risk of having a baby with a serious disease,” he says.

Some researchers caution that any attempts to recreate a process as intricate as egg development are sure to leave out important factors that aren’t yet understood. The cells have gone through so many lab-based manipulations, each of which introduces possible abnormalities, that it will be difficult to sort out what factors are playing a decisive role, says Allan Spradling, who studies oocyte development at the Carnegie Institution for Science in Baltimore, Maryland. Eggs with a range of severe abnormalities can still give rise to offspring, he notes. “Studying in vitro development may reveal in greater detail how a particular protocol differs from normal,” he says, “but it is much harder to see how such studies could reveal new insight into normal [egg development].”