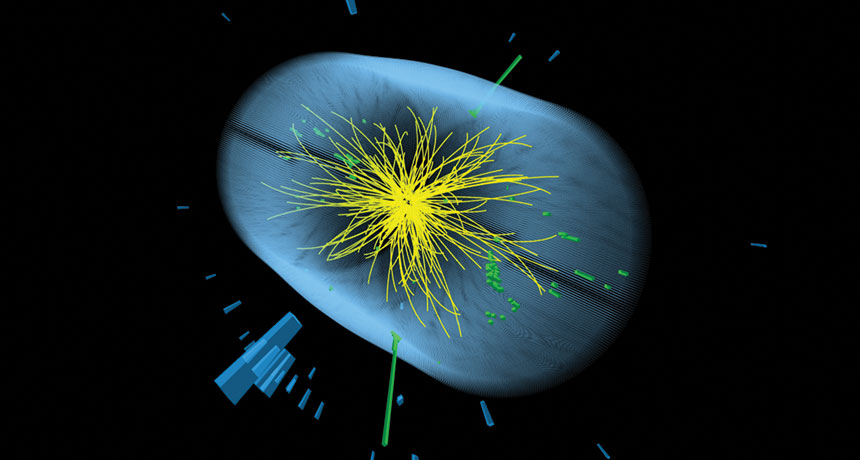 Physicists may soon know if a potential new subatomic particle is something beyond their wildest dreams — or if it exists at all.

Hints of the new particle emerged last December at the Large Hadron Collider. Theorists have churned out hundreds of papers attempting to explain the existence of the particle —assuming it’s not a statistical fluke. Scientists are now beginning to converge on the most likely explanations.

“If this thing is true, it’s huge. It’s very different than what the last 30 years of particle physics looked like,” says theoretical physicist David Kaplan of Johns Hopkins University.

The speculation was triggered by a subtle wiggle in data from two experiments, ATLAS and CMS, at the Large Hadron Collider at CERN (SN: 1/9/16, p. 7). The bump suggests a new particle that decays into two photons, but what that particle might be is unclear — its properties don’t line up with scientists’ expectations.

“I’m not aware of anybody who’d predicted the existence of such a particle,” says John Ellis of King’s College London. “There’s a dish on the table that nobody can remember ordering.”

More than 300 papers online at arXiv.org take a shot at explaining the potential particle’s origins, and on April 12, Physical Review Letters published four papers, selected to give a sense of the kinds of theories that could explain the observations.

One of the most plausible explanations, scientists say, is that the particle is a composite, made up of smaller constituents, much like protons and neutrons are made of quarks. The strong nuclear force binds quarks in these nucleons; the new particle would be composed of quarklike particles held together by a new type of strong force. “I think that that’s the model that works the best with the data,” says theoretical physicist Kathryn Zurek of Lawrence Berkeley National Laboratory in California.

The particle could also be similar to the Higgs boson — which was discovered at the LHC in 2012 (SN: 7/28/12, p. 5) — but with a mass six times as large. Still other theories propose that the possible new particle is a graviton, which is believed to transmit the force of gravity. The biggest constraint on devising a theory, or model, to explain the new particle’s origins is that it has so far revealed itself in only one type of decay, where it produces two photons. If it decays to two photons, says theoretical physicist Matthew Buckley of Rutgers University in Piscataway, N.J., “you might expect that it also goes to other things, and the fact that we don’t see that makes it difficult for many models to be right.”

Additionally puzzling is that the particle doesn’t seem to easily solve any of the major mysteries of particle physics. It doesn’t provide an obvious explanation for dark matter, an unidentified substance that makes up more than 80 percent of the matter in the universe. And it doesn’t easily explain a persistent puzzle known as the hierarchy problem, which is related to the mass of the Higgs. According to theory, physicists would naively expect the Higgs to have an enormously large mass, but for unknown reasons, it is found at a much lower scale.

Many physicists had pinned their hopes for solving these problems on a theoretical concept called supersymmetry, which proposes that each known particle has a heavier partner. But although theorists have concocted supersymmetric explanations for the particle, it doesn’t seem to fit easily into that box, either. “This thing doesn’t smell like supersymmetry,” says Maria Spiropulu of Caltech, an experimental particle physicist with CMS.

The lack of simple explanations makes some physicists more skeptical that the particle really exists. Instead, they think it’s more likely just a blip that will disappear with more data. “If it had been something that was confidently expected in some well-motivated scenario like supersymmetry, then I think people would be a lot more confident about its reality,” says Ellis.

The LHC experiments are currently gearing up to resume taking data after a few months on hiatus. So scientists expect answers by the summer, when more data could provide additional details — or make the hints of a new particle evaporate.

Updated analyses presented by ATLAS and CMS in March strengthened the case slightly, making physicists more optimistic that the hints will hold up with more data. Notably, says Spiropulu, the first signs of the long-sought Higgs boson showed up in a similar fashion before they were confirmed. So, she says, theoretical physicists have a license to be excited. “It is expected that they will run amok.”