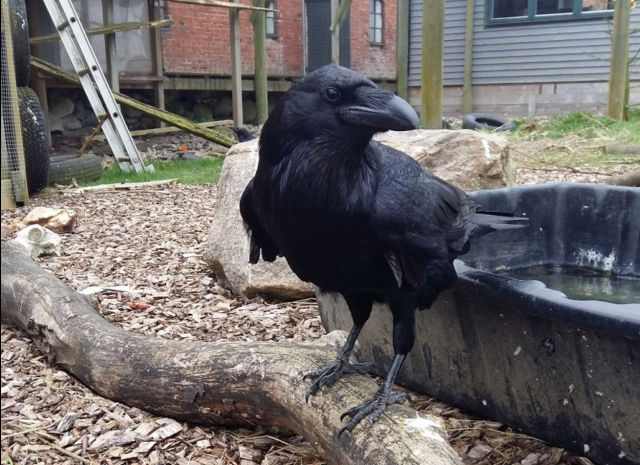 Crows, ravens, and other corvids are sometimes called feathered apes. Like primates, these birds form social groups, use tools, solve puzzles, recognize faces, and enjoy a good joke (especially if it’sat the expense of cats). Now a group of researchers has shown in a series of tests that corvids exhibit the same levels of self-control that chimps do when faced with a task that requires them to forgo a quick reward in favor of a bigger one that comes later.

The researchers published a fascinating description of their work in Royal Society Open Science, and their paper challenges a long-held belief that both absolute and relative brain volume correlate with intelligence. No longer will humans and our ape cohorts be able to claim that we’re smart just because our brains are big. Instead, say the researchers, it’s more likely that intelligence stems from neural complexity, whether that’s numbers of neurons or connections between them.

To measure corvid intelligence, the researchers used a common test of self-control called the “cylinder task.” It’s been used on many animals, including humans, and it’s one of the most basic ways to assess higher reason. As the researchers write, the test “requires deciding among options of differing values in relation to a temporal dimension.” In other words, it requires the animal to make decisions based on an understanding of time.

The animal is presented with an opaque cylinder that has openings on either side. An experimenter shows the animal that he or she is placing a tasty morsel of food inside the cylinder—in the case of corvids, the food is usually a bit of slightly rotted meat (delicious if you’re a scavenger!). Once the animal is used to the idea of getting food from the openings on the sides of the cylinder, the experimenter switches it out for a transparent cylinder. Now the animal has to make a decision. Should it go for the “fast” reward by trying to grab the food through the transparent material of the cylinder? Or should it use what is has learned and continue to use the side openings? (The animal has to be familiar with transparent material before the test.) An animal with little self-control will go for the fast bite despite what it has already learned about how the cylinder works. The animal with self-control will assess the situation and realize it has to go around to the side of the cylinder and stick its head inside to get the treat. The second choice takes longer, but it’s a lot more rewarding than smacking your face against plastic.

The researchers tested groups of ravens, jackdaws, and New Caledonian crows using the cylinder task and found that they performed just as well as apes when presented with the same task. These birds’ brains may be smaller and structured very differently from mammal brains, but they seem to think like us in many ways. Without self-control, argues animal researcher William Roberts, animals remain “stuck in time,” unable to make decisions that require future plans. Like apes, corvids are aware that delayed gratification is sometimes a good thing.

The paper is also a partial reproduction of a previous study about the evolution of self-control in a range of species including apes and non-corvid birds. The previous study concluded that apes out-performed birds because absolute brain size—and brain size relative to body size—were correlated with intelligence. Except, as the researchers on this new study point out, the original study did not test corvids, known to be among the most intelligent birds.

When the researchers reproduced the self-control test, using corvids, they discovered that ravens scored exactly the same as chimps on the test. They write:

The Corvus species performed on a similar level to the great apes, despite vastly smaller absolute brain sizes. A chimpanzee brain is roughly 26 times larger than a raven’s; nevertheless, both species achieve 100% success. The jackdaws were more successful than either the bonobos or gorillas, despite a brain 70–94 times smaller. Clearly, absolute brain size is no overall predictor of motor self-regulation across a wider range of animal taxa.

That said, ravens do have the largest absolute brain volume of any corvid. So size might matter within a given genus. Ultimately, however, this kind of study demonstrates why reproducibility is one of the most important parts of the scientific process. If these researchers hadn’t reproduced the previous study, we never would have learned that brain size isn’t the only thing that makes animals smart.