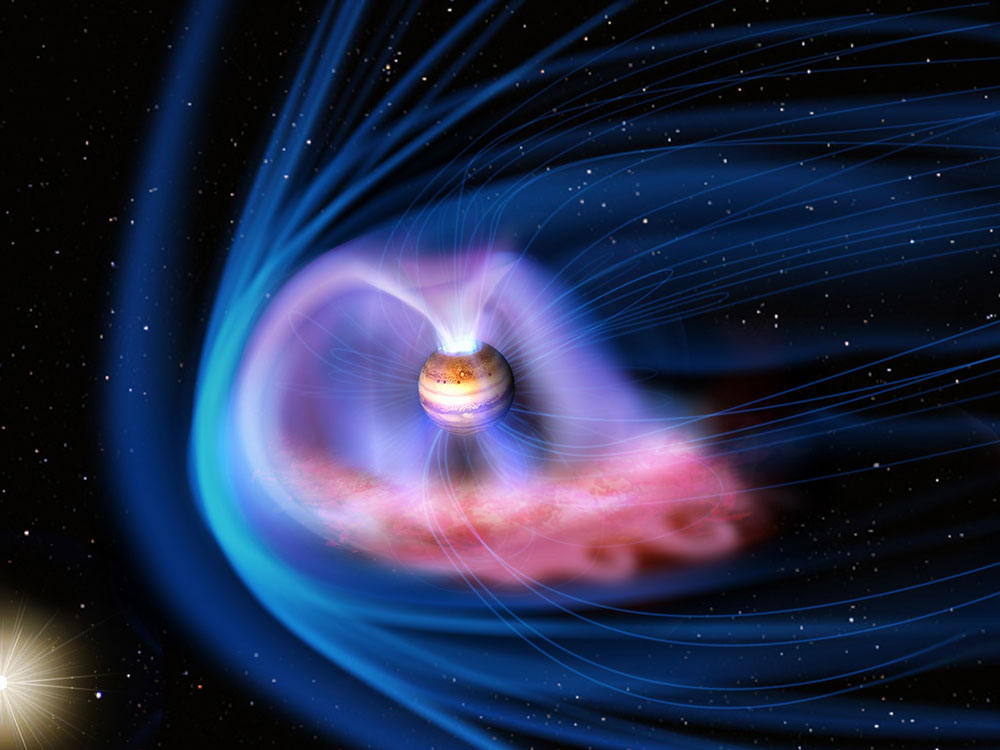 It is the first time that Jupiter’s X-ray aurora has been studied when a giant storm from the Sun has arrived at the planet. The dramatic findings complement NASA’s Juno mission this summer which aims to understand the relationship between the two biggest structures in the solar system – the region of space controlled by Jupiter’s magnetic field (i.e. its magnetosphere) and that controlled by the solar wind.

“There’s a constant power struggle between the solar wind and Jupiter’s magnetosphere. We want to understand this interaction and what effect it has on the planet. By studying how the aurora changes, we can discover more about the region of space controlled by Jupiter’s magnetic field, and if or how this is influenced by the Sun. Understanding this relationship is important for the countless magnetic objects across the galaxy, including exoplanets, brown dwarfs and neutron stars,” explained lead author and PhD student at UCL Mullard Space Science Laboratory, William Dunn.

The Sun constantly ejects streams of particles into space in the solar wind. When giant storms erupt, the winds become much stronger and compress Jupiter’s magnetosphere, shifting its boundary with the solar wind two million kilometres through space. The study found that this interaction at the boundary triggers the high energy X-rays in Jupiter’s Northern Lights, which cover an area bigger than the surface of the Earth.

Published today in the Journal of Geophysical Research – Space Physics, the discovery comes as NASA’s Juno spacecraft nears Jupiter for the start of its mission this summer. Launched in 2011, Juno aims to unlock the secrets of Jupiter’s origin, helping us to understand how the solar system, including Earth, formed.

As part of the mission, Juno will investigate Jupiter’s relationship with the Sun and the solar wind by studying its magnetic field, magnetosphere and aurora. The UCL team hope to find out how the X-rays form by collecting complementary data using the European Space Agency’s X-ray space observatory, XMM-Newton, and NASA’s Chandra X-ray observatory.

“Comparing new findings from Jupiter with what is already known for Earth will help explain how space weather is driven by the solar wind interacting with Earth’s magnetosphere. New insights into how Jupiter’s atmosphere is influenced by the Sun will help us characterise the atmospheres of exoplanets, giving us clues about whether a planet is likely to support life as we know it,” said study supervisor, Professor Graziella Branduardi-Raymont, UCL Mullard Space Science Laboratory.

The impact of solar storms on Jupiter’s aurora was tracked by monitoring the X-rays emitted during two 11 hour observations in October 2011 when an interplanetary coronal mass ejection was predicted to reach the planet from the Sun. The scientists used the data collected to build a spherical image to pinpoint the source of the X-ray activity and identify areas to investigate further at different time points.

William Dunn added, “In 2000, one of the most surprising findings was a bright ‘hot spot’ of X-rays in the aurora which rotated with the planet. It pulsed with bursts of X-rays every 45 minutes, like a planetary lighthouse. When the solar storm arrived in 2011, we saw that the hot spot pulsed more rapidly, brightening every 26 minutes. We’re not sure what causes this increase in speed but, because it quickens during the storm, we think the pulsations are also connected to the solar wind, as well as the bright new aurora.”

Another study out today, led by Tomoki Kimura from the Japan Aerospace Exploration Agency (JAXA) and co-authored by the UCL researchers, reports that the X-ray aurora responds to quieter ‘gusts’ of solar wind, deepening this connection between Jupiter and the solar wind.