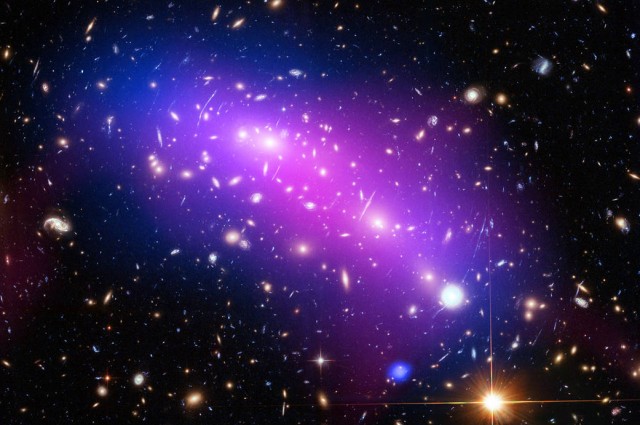 This kaleidoscopic image of twinkling stars and cosmic hazes shows the site of a colossal collision of two galaxy clusters, coming together to form a single entity known as MACS J0416.1-2403.

Galaxy clusters can be made up of thousands of galaxies, along with hot gas and dark matter, bound together by gravity. Under the right circumstances, these clusters can collide and clump together, creating a larger galaxy cluster.

The image shows a composite of data from three different observatories and telescopes. The blue emission was captured by the NASA Chandra X-ray Observatory, the pink emission by the NRAO Jansky Very Large Array, and the galaxies and stars were captured by NASA/ESA Hubble Space Telescope.

As the European Space Agency explains on the NASA website, MACS J0416 is some 4.3 billion light-years from Earth. It contains a significant amount of dark matter, just as you’d expect from a galaxy cluster. We know this as it leaves a detectable imprint in visible light by distorting the images of background galaxies. In this image, that dark matter “appears to align well” with the blue-tinged gas, said NASA.

However, there’s evidence to suggest that this clash of galaxy clusters hasn’t actually happened yet, as the core of gas and dark matter suggest that it has not yet been disrupted.

It’s estimated that MACS J0416 has a mass 160 trillion times that of the Sun. Due to this astronomical mass, MACS J0416 is magnifying and bending light from objects behind it through a phenomenon known as gravitational lensing. Astronomers can take advantage of this curiosity to trace galaxies that existed just hundreds of million years after the Big Bang.

You can see a larger image of this stunning sight on NASA‘s website.