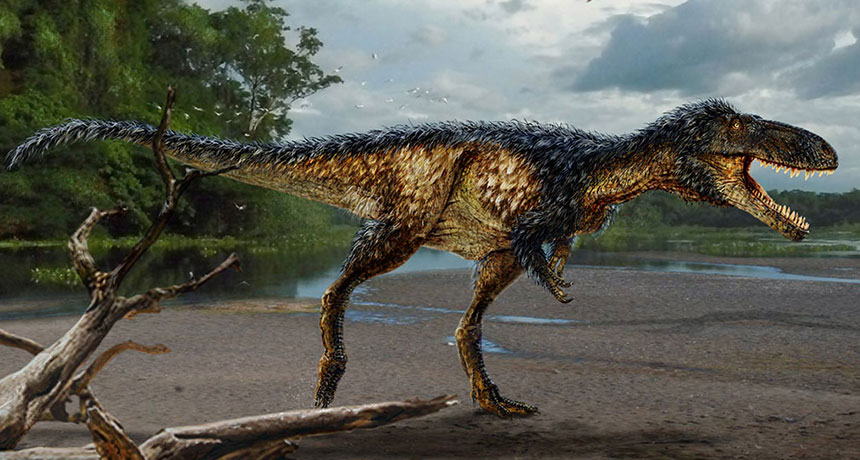 A fossil from a new species of dinosaur is helping to bridge a crucial 20-million-year gap in tyrannosaur evolution.

The key fossil is a 90-million-year-old, grapefruit-sized partial skull from Uzbekistan’s Bissekty Formation. This tyrannosaur braincase, the first well-preserved one found from the mid-Cretaceous period, shows that, although still small, tyrannosaurs of the time already had brain and ear features of later tyrannosaurs. Researchers have dubbed the in-betweener Timurlengia euotica, meaning “well-eared.” They describe the new species in a paper to appear in the Proceedings of the National Academy of Sciences.

The braincase sheds light on a long-standing mystery: how tyrannosaurs evolved in the gap from 100 million to 80 million years ago from an “average Joe” horse-sized predator in the Early Cretaceous to the huge apex predators they became in the Late Cretaceous. “Our study is the first to show that the sophisticated brain and hearing of big tyrannosaurs evolved in smaller-bodied species, long before tyrannosaurs got giant,” says study coauthor Stephen Brusatte, a paleontologist at the University of Edinburgh. These advantages, he adds, may have helped tyrannosaurs become such successful — and eventually enormous — predators.

PUZZLE PIECES In addition to a well-preserved braincase, researchers have found several other fragments (red) of a T. rexrelative named Timurlengia. The size and shape of the fossils indicate the 90-million-year-old dinosaur was about as big as a horse.

Analyzed against a database of other tyrannosaur skulls, the braincase shows that Timurlengia’s brain and ear “are almost identical to T. rex, just smaller,” Brusatte says. In particular, the dinosaur’s long cochlea, a part of the inner ear, is a signature of bigger, badder Late Cretaceous tyrannosaurs. “The long cochlea would have meant better sensitivity to low-frequency sound,” Brusatte explains. That sensitivity would have enabled Timurlengia to detect very subtle or distant sounds, giving the dinosaur clear advantages over other predators.

“Timurlengia fills an important gap in both time and evolution,” says Lawrence Witmer, a paleontologist at Ohio University in Athens who was not involved in the study. “Charles Darwin couldn’t have scripted it any better.”

The next step is to determine if the braincase is typical of a mid-Cretaceous tyrannosaur, or just one oddball data point. “We’ve analyzed the heck out of each scrap of Bissekty tyrannosaur bone,” Brusatte says, “so the thing that could move us forward is the discovery of new specimens in other middle Cretaceous rock units in other parts of the world.”