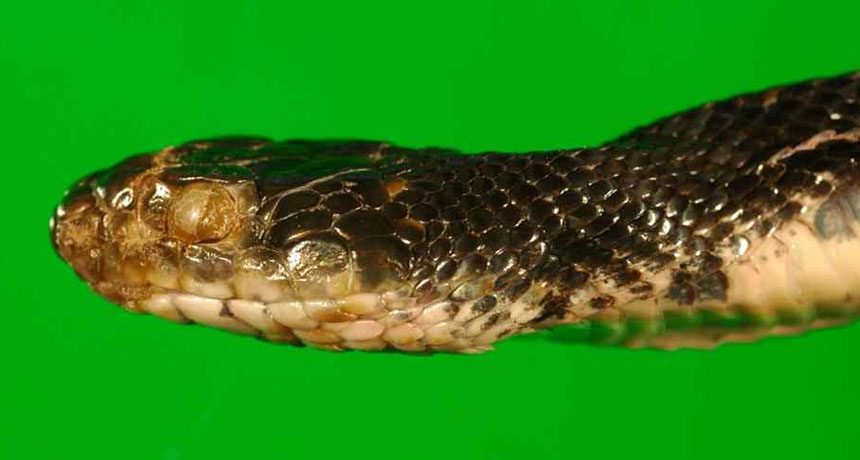 There’s a deadly fungus spreading among snakes in the United States. But don’t cheer. As much as snakes might frighten us, they’re important players in the ecosystem, and we really don’t want to lose them.

In 2006, scientists discovered some odd skin infections among snakes in declining populations in New Hampshire. Soon after, fungal infections were found in massasauga rattlesnakes in Illinois, and the disease appeared to be bad enough that it might eradicate the species from the entire state. Over the next decade, researchers found the fungus in more and more states in the eastern United States, in some cases killing up to 90 percent of infected snakes. With the discovery earlier this month of the disease in a young broad-banded watersnake in Louisiana, snake fungal disease has now been found in a total of 14 snake species and 16 states. And scientists are worried that the situation could get worse.

For years, the fungus Ophidiomyces ophiodiicola was the suspected culprit behind the disease, but scientists couldn’t tell whether the pathogen was causing the skin lesions they were seeing on dead snakes or if the fungus had just taken advantage of lesions that were there from some other cause.

A young broad-banded watersnake in Louisiana had skin lesions that tested positive for snake fungal disease.

But last year, Jeffrey Lorch of the U.S. Geological Survey’s National Wildlife Health Center in Madison, Wis., and colleagues managed to nail down the link between the fungus and the disease. They infected corn snakes in the lab and observed skin lesions that were identical to those found in wild snakes that had the disease. The experiment also gave some clues as to why snake fungal disease can be deadly: In the lab, infected snakes molted more often, and some exhibited behaviors that, in the wild, could be troublesome, such as anorexia and hanging out in more open areas.

“Chronic O. ophiodiicola infections could have significant impacts on host energy balance and body condition,” Lorch and his colleagues wrote in their study, published November 17 in mBio. “Failure of infected wild snakes to procure sufficient food could result in a feedback loop that reduces host defenses, facilitating more severe infections that further compromise a snake’s ability to obtain prey.”

That fungus shares many similarities with another fungus spreading across the United States —Pseudogymnoascus destructans, which causes white-nose syndrome in bats. Like P. destructans, O. ophiodiicola is a soil fungus, and it has many of the same enzymes that have helped white-nose syndrome persist, researchers reported in the October Fungal Ecology. Researchers have also found parallels to the chytrid fungi spreading among frogs and salamanders.

As much as people don’t like snakes, they would probably like life without snakes a lot less. Snakes eat rodents, so if you don’t want the mice and rat populations to get out of control, snakes are necessary. (Call them a “necessary evil,” if you like. The snakes won’t mind.)

Snake fungal disease isn’t the only worry for snake populations. A 2010 study in Biology Letters found some worrying evidence of a global decline in snakes, possible related to habitat deterioration, lack of prey and, maybe, climate change. But the status of the world’s snakes right now isn’t really clear. There’s so little known about so many snake species that scientists can’t say how bad the situation might be.